Antropofagus - Methods Of Resurrection Through Evisceration

Five years have passed since their previous full length. "Architecture Of Lust" was a fine example of well played brutal death metal, setting the standards really high for this third full length of theirs. Italy has proven to be a brutality breeder and these guys here are meant to carry the flame from where bands as Devangelic, Septycal Gorge and Hour Of Penance left it. About damn time also since these guys are the oldest ones.

"M.O.R.T.E" starts with a short intro and then all hell breaks loose. 'Spawn Of Chaos' breaks the silence blasted and ferocious. Swirling, technical riffs and a bulldozer sounding,  bass guitar lay a nice brutal carpet for the drummer to unleash his savagery.  'Chants For Abyzou' is the second one and by Crom's balls. These guys have really nailed it. All their songs aim in sheer brutality. This is obvious from day one. Wrathful performance in every second. The vocals are the typical brutal growling type vocals appropriate for this type of extremity. The only difference is that the vocals here are carefully placed. Used as an instrument and not just to fill gaps. With a clear pronunciation, sometimes just growling and others, a combination of growls and shrieks, adding an extra point of brutality to the entire outcome. The hearing proceeds with no sweat. There's a great flow to this one. One song succeeds the previous one and you don't even notice the changes unless you're really stuck on it. 'Praise To A Hecatomb!', 'Methods Of Resurrection Through Evisceration', 'Omnipotent Annihilation' and on and on. Their brutality is ferocious but what amazes most is the fact that when they decide to cool the engines a bit they get dark and abysmal. Fans of Morbid Angel will meet their match here.

Yep. Antropofagus have nailed it ladies. Production of course helps a lot, bringing forth the savagery of their material. Loud and clear. Every instrument has its own place to the mix. Every instrument can be heard but at the same moment they all work together perfectly in the entire sum without anything flaming. Bright mastering making the whole music wide and heavy. Couldn't get any better. Production fitting to their technical playing. The album ends with a great cover on Malevolent Creation's  'Living In Fear'. Simply perfect. "Methods Of Resurrection Through Evisceration" is what Antropofagus have to offer for 2017 and I bet it will haunt your stereo for a little while. 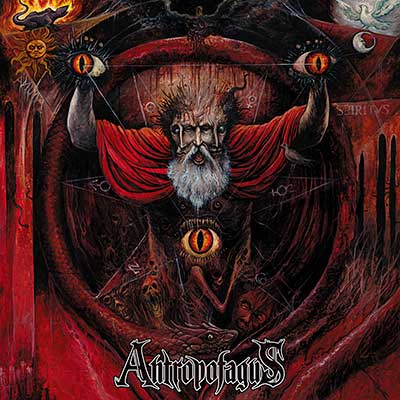