The Danish metal band Anubis Gate has released a new album called Andromeda Unchained. The CD is full of harmonies, quality musicianship, and the instruments are all cleanly layered in the mix for easy listening. I do not mean to say that the band is “easy listening,” but the record seems to be put together not to offend. I mean, why else would a metal band receive a Grammy nomination for the Danish Metal Awards for Best Album of the Year? It would not. I just point this out to make the point that this album is very listenable and could just carry their career as a band further around the world.

The song structure is conventional, especially on “Resurrection Time” where the singer Jacob Hansen is accompanied by the riffing guitars and rock style drums instead of breaking through walls with those instruments. The music is definitely designed to work behind a vocalist, not to forge new spaces for music itself. This also explains why it is up for awards because the committees that vote on such items do follow a routine of more standard produced items. The system always works for itself and one can expect the same here too. This is not a criticism per se, but an observation and certainly a qualification. This album could do very well in the United States because it fits the main stream ideas of metal segments and the singing is not too growly. The singing is almost pretty and could be placed into a more rock-pop formula. I do not prefer this type of metal myself, but I do respect the quality production value.

The CD is for many others though. So if you are into Nightwish you might like this CD. If you prefer Gallhammer or Anaal Nathrakh you will not. If you like later Black Sabbath and even the harmonized segments from Dimmu Borgir’s oeuvre, then this CD is for you. I say check it out. I also specifically want to say that one must give close listening attention to the amazing solo instrumental section at the end of “This White Storm Through My Mind” because there is real music there. 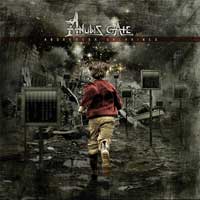