The Dutch band Anubis has done something that only one other band in metal has done (at least that I can think of), they have adapted something of Egyptian music to metal. Nile is of course the other band on that short list. But Anubis really is not a great band. Nile has taken the heavy, mythology, and even some moments of actual traditional Egyptian string-instrument playing into their aesthetic. Anubis has stayed on the surface in this regard. Their sound is trash/thrash/speed/metal that is cool for trash, but really does not get me going because they have not rewritten trash/thrash in any way other than to repeat the clichés of trash/thrash with a couple moments of black metal vox. I am not impressed with their work on the EP: THESE ANCIENT HILLS. The guitars are generic, the rhythms are old hat, and the vocals are better left unsung. Perhaps THESE ANCIENT HALLS should be left to the disintegration of time’s dust like ancient Egyptian culture has been; only to be unearthed in the future as musical historic curiosity. The harmonizing on the first track, “Anubian Melodies,” is the only thing on the EP worth keeping alive for today. 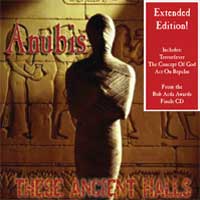 1. Anubian Melodies
2. Contempt Is Our Guide
3. Terrorfever
4. The Concept Of God
5. Act On Repulse