Anyface - The Cult Of Sickness

With a 10 year history, Anyface from Italy have marked 2010 with their second full length release entitled The Cult Of Sickness. With just eight tracks running for about 37 minutes, this record might seem as short by death metal standards, but in fact it's just OK this way. It gives a very good picture of the band's abilities and the music they play, and you don't really need more.

First, the good part. Anyface don't make their music too simple and straightforward, which is really good for a death metal band. There are a lot of odd rhythms here and even occasional jazz interludes, which sound quite nice. The music is executed at a very good level and the overall sound of this record is quite pleasant. It's quite raw and corresponds to the overall feel of the music – brutal and energetic. What I personally liked about this album is that there are no really modern elements in it like chugging breakdowns, downtuned 8-string djent machine gun riffs and any stuff you would hear from a typical death metal band with prog influences. It's just good old-school death metal with slight elements to keep you interested.

Now, for the bad part. Reading the passage above might create an impression that The Cult Of Sickness is an interesting album that you might listen to over and over again. However, it's quite far from being the album you will listen to more than once, unless you are a fan of Anyface. What might look really good on paper (old-school death metal with odd rhythms and other interesting elements) isn't necessarily a good thing in reality. The music is quite featureless and you don't get hooked by it at all. It just flows in the background and doesn't grab your attention in any way. And after even a couple of listens you won't remember a particular tune from this band, because it doesn't leave a particular impression at all. With so many bands out there, it's quite a pity because Anyface just get lost in the crowd of bands playing the same music. 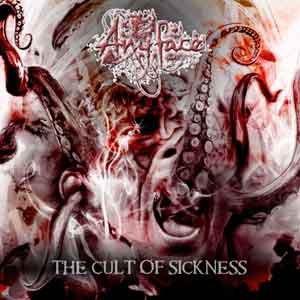