Ape- Survival Of The Fittest

Ape may seem like a simple band, but they're not. The best way to describe Ape's work is classic grunge rock. By taking the thickness of Alice And Chains and mixing it with melodies that range from influences such as Pantera to the Scorpions to Ozzy, one can expect a very varied album. And Survival Of The Fittest is just that. For a sophomore debut it certainly shows that the band can grow and mature into a much better form in just a short amount of time (two years, in this case). Ape works hard at creating excellent groove rock album with plenty of melody and a way to make each song as unique as possible.

Opening with "It's All My Fault," there's a slow, wailing guitar melody that sounds like something depressive and grungy, like Alice And Chains would do. Then suddenly the guitars turn to a heavier note with the drums pounding in the background and it's like hearing the groove from Pantera all over again. Vocals are clean but also throaty, like that of Alice And Chains and there's even a little Tool influence thrown in there too. The entire song keeps things mid pace but there's a great melodic solo near the end as well. "It's Not" sounds like a great power metal track, but if one listens closely the melodies almost sound like Credence Clearwater gone heavy metal or hard rock; it's that slight country tinge that raises the eyebrow. "Beyond The Depths Of Reality" changes tempo by offering more crunching guitar lines and really sounds like a good hard rock song in the vein of something like Disturbed or Breaking Benjamin. "So Lonely" is a melodic rocker that's in the vein of Incubus. "How You Left Me" has the bite and kick that Ozzy Osbourne puts in his songs. "Friends Or Foe" allows the vocals to hit a high note and the guitars to deliver some classic lines that sounds like the Scorpions." Finally, "Barren," offers a mid paced grunger that sounds like Stone Temple Pilots with just a bit more melody infused. Altogether it is a great mix of rock influences for this band.

There's also a healthy list of instumentals as well. "Survival Of The Fittest" switches between a mournful, depressive guitar notes in the solos before switching to a simple melody. The tapping drum is the perfect touch for the atmosphere and altogether it is a very haunting, different vibe from most of the other hard rock tracks Ape delivers. On the other hand, "Irate Primate" is full of life and energy as that instrumental delivers plenty of jazzy and exciting chords mixed with solos. It sounds about on par with the legendary John 5, who is a solo guitar artist with a great balance between hard rock and country instrumentals. Throw these two tracks into the mix that is Survival Of The Fittest and it is most likely that the entire album, along with Ape's musical career, is going to survive for a long time. It's good to see hard rock that is varied and even though the influences are recognizable only after a minute into each track, one still can't help but enjoy that show these guys put on for their earhole. 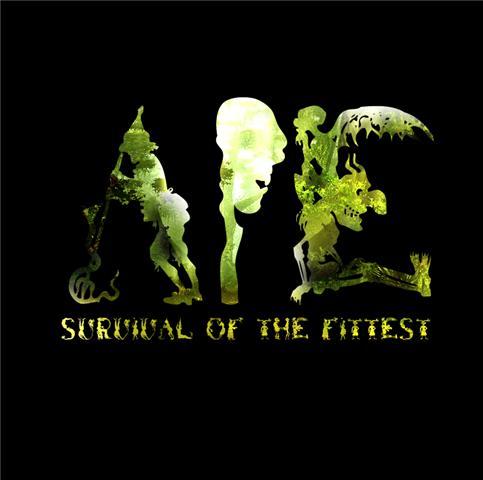