Very little is known about this band and only 871 likes on Facebook! :O but if their titles and genre are anything to go by plus the name Ape Unit then I can’t wait to review this.

The cover is of a rather plump young kid enjoying the sun is that so unforgivable?

My Geography not being so hot I wondered where the hell was Cuneo? and then realised it is in Italy – I was surprised as the Italians are usually known for being romantic or so one would think, but these guys are the exception to that rule for sure! Or maybe not depending on what you class as romantic these days.

“No hey Bananas” starts with the sound of a little kid singing – get ready for the splat! Oh yes and with an almighty explosive array of gruesome grind it comes, I was not wrong! But like all true grind shit it never lasts long enough!

The second track has more groove than a 70’s lump of vinyl and it continues with a very angular track “The difference between you and Bahamas” for me that would be the place is hot, I however am not!

Grind galore! Time to yank the volume up another notch and feast on the goodies, so far it has not disappointed and Pig Motocross has some awesome fiery guitar and the sound of a bike starting up – I can just imagine a piggy on a bike haring around a muddy field and like a pig in shit the grinders produce another great track!

The gory grind continues with some epic titles with frenzied splattering’s that just whet the appetite before moving on to the next track, but this is true grind and it does not get better than this.

Nice grunts and pig squeals on La Chanson pour Le Petit Prince – don’t ask me to translate too busy getting into its 35 second entourage!

Triggering Santa – I never knew he was Mexican lol – but a lot of clowning around begins until the brutal stuff kicks in – got to be one of my favorite tracks on the album – enough to scare the kids senseless, and at 1 minute and 35 seconds it manages to weedle its way into the brain – Great track! Yeehaw!

A 44 second smash of grinding growls and awesome grooves this track “The bad and the breakfast” is violent without a doubt, but offers a great melodic groove and if head-banging, despite its short introduction, will still give you whiplash trying to keep up with the killer riffs.

Yuri and the Cube is a little more menacing and sinister with low toned guitar and slow plodding beats but still shows a killer side.

The title track suggests the end is near but Tijuana is nearer whatever that is but, the bass hooks at the start of this grinding grenade are without a doubt just superb!

The grisly barrage of riffs and grinding beats continue with a melodic array from “Bastards of Villanova” It is fast and uncompromising but frustrating when it only lasts a few seconds just as you start to get into the grind – you guessed it – it finishes.

Slower start on “Intentions in all pieces” with a lot of ambiance that sends chills down the spine and then a magnificent guitar starts up with a nice chug effect which in turn starts the head moving frantically as it continues to smash your skull in and pulverise your senses.

From “Ska to God” is a mix of slow and sinister and fast and frenzied favouring the slow and sinister with low tuned distorted guitar but does not really go anywhere and my least favourite track on the album – a bit disappointing to finish on this track but the band I suppose have their reasons.

To Sum up:
This album overall is delightfully brutal with a smattering of humor as all grinders seems to possess.  It houses some great riffs, bass hooks and blast beats with that all important ingredient only known to brutal slamming metal heads and that are: the pig squeals and grunting noises that add more clout to the already pulverising tracks contained within such an album.
My favorite is still “Triggering Santa” as it has that element of fun and still brutal at the same time giving the listener more to enjoy.
It’s whacky and most definitely my kind of album – you have to hear it to fully engage in its quality of unrivalled brutal goings-on! If you love grind/power violence then get on it! Highly recommended!![embed]https://www.youtube.com/embed/Hci2p5sVRdo[/embed] 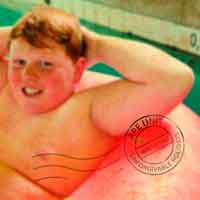 1. No Hey Bananas (Tengo Platenas)
2. Double Dance Bass Lines In Alaska
3. The Difference Between You And Bahamas
4. Seena Is A Warrior Princess
5. Pig Motorcross
6. Last Time You Ate Grongo
7. H.C In The Name Of C.K
8. Motochrist Supercrust
9. La Chanson Pour Le Petit Prince
10. Triggering Santa
11. The Bad And The Breakfast
12. Yuri The Cube
13. The End Is near, Tijuana Is Nearer
14. Bastards Of Villanova
15. Intentions In All Pieces
16. From Ska To God