Chile’s Apostasy unleash their mix of thrash and black metal to fans on their third full length album “Death Return,” and like their previous efforts it is raw, yet groove laden. Think of a mix of early Testament meets Dark Throne with its catchy riffs, thunderous drums, and harsh vocals that sound evil and grim, but not quite to the point of annoying shrieks. The band does well at balancing the faster, speed thrash moments with slower more melodic ones such as on ‘Intro/ Death Return’ with its excellent melodic intro and then explode into something that sounds like something from Metallica’s “Ride the Lightning.” The raw vocals have a little reverb to them that add the whole old school factor and while not the fastest track on the album, it has some excellent thumping moments with the drums that hep carry the groove before picking things up with the solo. Other tracks like ‘Jus Primae…’ and ‘Son of Hate’ feature faster riffs, but the slower midsections of the music draw back that dark, evil tone that is usually associated with black metal with than focus on sheer speed and obliteration with the thrash elements, so Apostasy keeps a balance all the way through the album.

‘Deceased In Funeral’ is probably the closest track to ‘pure thrash’ where the group barely includes any black metal elements aside from the vocals, and even those have more of that barking rasp with some cleans here and there as opposed to the grim shriek that is heard earlier. For those looking for a thrash epic ‘The Great Apostasy’ is chock full of excellent solos, groove bearing riffs, and furious drumming that makes listeners really feel they are getting their worth out of the album. A lot of the other tracks are shorter an tend to feel like they go by too fast, as with most thrash tracks, but the epic here really draws out and shows listeners what Apostasy can do. In inverse, the following ‘Praise Of Darkness’ is barely 2 minutes long and features a very dark groove that is not quite thrash or black metal, so it is a unique sound, but some might find it more of a filler track if anything before it leads into the chiming ‘Obey The Antichrist’ which slowly churns its way through even though the drums sound like they are on overdrive with their crushing speed, but the riffs are that great kind of catchy thrash that support the rawness of the vocals. And the chiming bells just add that atmospheric black metal element to boot.

Overall those who have heard Apostasy’s earlier work will not hear too much deviation on the new album, which may be a good or bad thing depending on how much one likes the similarities between albums. While there is no instrumentals here, the push towards the epic factor on their track lengths should be appreciated, and the continued balance between black metal and thrash is still strong. While the raw thrash elements heard on their debut album back in 1991 may be a bit restrained during live show where attenders probably feeling like slamming in the pit one moment and suddenly entranced to the slower swaying with the darker moments of the tracks, the music is still solid. Still very old school without the raw demo tones so everything can be heard clearly. Definitely worth checking out for those who enjoy a black metal shroud of evil over their metal led by the heavy groove of thrash. 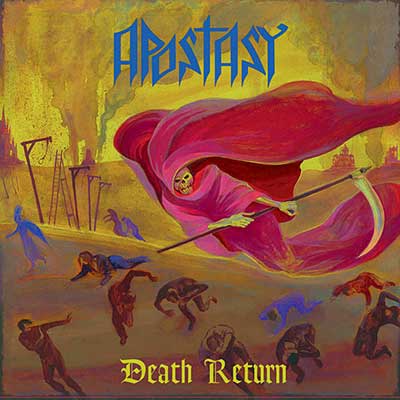