One of the most eagerly awaited albums of 2010 would have to be Apostle Of Solitude's "Last Sunrise". They produced one of the all great doom albums ever in 2008 with "Sincerest Misery" so this album was always going to be a difficult follow up, so how does it compare? Can it match the downright misery and raw emotional on "Sincerest Misery"? Well after some 20 spins of the disc i have to say the answer is no but man it comes close. First thing i have to get out of the way is the absolute horrible choice for a album cover, not that its that important but its always a unsettling feeling you get to see a band of this quality choose something so banal but that is just my opinion. For those who have never heard the band and that should be a crime, they play pretty much in the traditional doom metal style, similar to the works of Solitude Aeturnus, Candlemass, St. Vitus, and The Obsessed, they ever have a cover version of the song "Streetside" on the North American version of the album. They cover the usual doom subject matter like grief, depression and despair but they do it with a sense of class, you always get the feeling the band has been through the emotions they are writing about. The album starts off with three un-eventful tracks however, not they are bad, far from it but it sounds the band is going through the motions before unleashing the pure doom gold. "Last Sunrise (Requiem), "Acknowledging The Demon" and "Other Voices" come off sounding like mood setters for the rest of the album but its when you get to track four and beyond that the album really unleashes its classic material. "Letting Go Of The Wheel" starts off quietly enough but by the time you get through the 9 minutes of this harrowing song, it leaves you floored, its intensely heavy. "Hunter Sick Rapture" is a mid-tempo pulverizer and "Sister Cruel" is a masterpiece of doom metal craftsmanship with the perfect timing of guitar, vocal and drum accents to make everything just that bit more dramatic. "December Drives Me to Tears" drowns itself in melancholy with a piano section that is perfectly placed within the arrangement and yet ends with some of the heaviest sounds the band has ever made. "Frontiers of Pain" is the high-point of the album, it begins with a killer heavy riff before changing gears into some awesome chugging rhythms. Throughout the whole album, the bass playing and sound is exceptional but it really stands out on "Frontiers Of Pain". Simply put this track is one of the highlights of the band's career thus far and one you will go back and listen to again and again. The final track is called "Coldest Love" and its one of the best doom metal tracks you will ever hear. The raw emotional that the band and partially Chuck’s vocals dished out on this track is both inspiring as much as it is emotionally draining. So there you have it, overall its a patchy effort compared with "Sincerest Misery" but then again, how can you follow up such a masterpiece. The album has a slow, predictable beginning, a great middle and a mind-blowing ending. The musicianship is of course excellent and the production is again top shelf stuff, pity about the average album cover though. If you judge the album by its own merits, its a very good album indeed but listen to this album and "Sincerest Misery" and you will spot the weaknesses. There is not as much variation as the previous effort from Apostle Of Solitude but it is still a solid album. 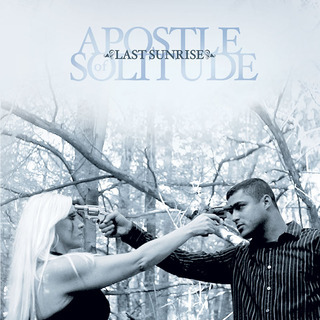