Apostles Of Perversion – Revenge Beyond The Grave

Spanish death metal bands tend to be of the most ugly and brutal kind as this band has been around for a while but has a poor release rate with a demo in 2006, an EP in 2011 and this album that came out last year and is a little late arriving on the decks. The band plays standard death metal, and they do it exceptionally well and if they’d been around in the early 90s they would have been my new favourite band.

The title track opens the album and immediately the bottom heavy production ticks the right boxes for me as do the vocals which don’t pander to the ultra-low gurgling variety that many of the brutal death metal acts seem to prefer. The guy’s tone is exceptionally good and isn’t too far off Mr Benton or Mr Fasciana in style. 'Shoot ‘Em All' owes plenty to Cannibal Corpse with its pounding drum beat as does 'Maggots On Your Putrid Skin' which appears later on the album. The band blends quite a few of the pioneering death metal acts extremely well such as Deicide and Cannibal Corpse but also Suffocation and Malevolent Creation to good effect though if its originality you are wanting then this is definitely not for you.

'Masters Of Decay' has that Suffocation style with a slammy riff initially that is very catchy to get that head moving with plenty of double kick as riff break intercedes complete with the cymbal smash, got to love the cymbal smashes, with subsequent blast beat. Maintaining the blasting is 'Portrait Of A Serial Killer' which retains a sharp riffing stance, deploying copious double kick for density in waves as the tune is very like early Deicide which should have you salivating if you crave that style of death metal, which you should if you like death metal. I’ve mentioned 'Maggots On Your Putrid Skin' earlier, the songs Cannibal Corpse credentials are plainly evident as the songs battering blasts offer a no frills bludgeoning that continues on 'Blood On The Road' complete with sound effects of skidding and insane laughter.

'Gore-Whore' has a slower seeping riff and a more spoken vocal style which morphs into the gut churning bellow ready for blast which abruptly appears. There is an overt catchiness to the song as well, even though the song is rocketing along via the blasting, as the deluging double bass inundates at opportune moments leaving 'Thrown In A Garbage Can' to close the album in fine savage fashion with unerring and uncompromising speed.

Sometimes you just want something familiar to listen to but still something new and Apostles Of Perversion are just the band to do that. Bludgeoning, no nonsense death metal, what more do you need. 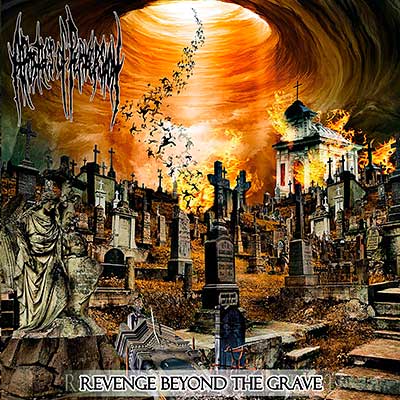