Archaic Decapitator are back with their newest release, "The Apothecary". This piece is melodic death, in line with their usual style. For those who aren’t familiar with them, Archaic Decapitator is comprised of Gary Marotta (drums), Chris Ridley & Yegor Rubanyuk (guitars), Craig Breitsprecher (bass), and Kyle Quintin (vocals). The band is based in Connecticut, United States after being formed there in 2007.

But to delve into the meat of this review: it is quality melodic death. Personally, I’m not a close fan of the genre, but I quite enjoyed this album. It’s a surprisingly relaxing album, absolutely the kind of music you’d put in the background when doing a task that requires patience. It doesn’t stand tall enough to stand up to being given your full attention, but that could be written off as it being outside my usual musical taste.

Now, this album is only five songs long, beginning with 'Circadian Promise' – a 43 second intro that has an almost Type O- feeling with its gothic piano and ominous horn. This is followed by 'Skyward' which is a very fast-paced song with a few unique instruments added. The instrumentalism is top-notch and is similar to classic Nightwish, albeit heavier – the vocals here remind me heavily of the vocals in Upon Ruin’s "Legacy Of Desolation".

The third song, 'Cruelty Of The Host Star', is much more upbeat, faster-paced, and heavier – if you’ve ever listened to Dethklok, you’ll feel at home with this song. Coming in at fourth, 'Diminishing Returns' offers a general melo-death background but with a very strong and "spooky" style. This song has that Halloween vibe that I’ve mentioned before (ala Xasthur, JT Ripper) and for that, it will always have a spot in my playlist (the musicianship doesn’t hurt either). Lastly, the album’s title song, 'The Apothecary', is probably the most purely melodic track on the album, but that in no-way lessens how heavy the song is in parts. This song definitely deserves the namesake of the album.

"The Apothecary" by no means is bad, but it very much feels like a first album – lacking passion and consistency. Despite that, I encourage all melo-death fans to give it a shot. Besides, at only 23 minutes, it's hard not to justify giving these guys and all their work a shot. All said, I am excited to see this band grow and progress. 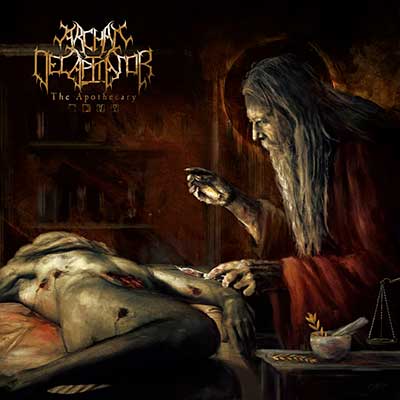