Italy’s black metal group Argesh charges out of the gates of Hell with their debut full length, “Excommunica.” Avoiding the typical Darkthrone, Judas Iscariot, or Dimmu Borgir approach to black metal, the group does their best to still have a raw, but polished sound for the album, drawing on influences like Behemoth, Worm Shepherd, and even a little Watain or Sargerist. The result is atmospheric with some symphonic elements but still evil and heavy that will make most black metal enthusiasts proud.

The opening ‘Abiura’ is percussive, atmospheric, and a great lead for the album which helps highlight the group’s idea of ‘apostate black metal.’ Then we jump into the familiar black metal territory with the mid paced riffing of ‘Suffocate In Oxygen.’ Vocals are varied between the deep snarls that would appeal to those who like Behemoth or Worm Shepherd and then the more mid paced snarls that sound a bit more like Watain. Argesh even throws in some clean vocal work that sounds like ICS Vortex so there is a little of the hars/ clean duo that groups like Dimmu Borgir incorporate. Thankfully, the overall feeling is raw and evil and not dramatic or haphazard. ‘Source Of Miracles’ follows suite, but it is more guitar focused with some melodic solos and less varied vocal work, but the chugging rhythm of the music brings back the tribal percussive feeling of the first track. Definitely more straightforward black metal.

‘Praelatorum Pedophilia’ adds more symphonic sections and spoken word passages with longer, darker riffs, adding back in the atmosphere that was lost on the earlier tracks. Here it feels more like Mayhem meets Deathspell Omega, but again, rather than opt for lengthy tracks with fast then very slow moments, Argesh continue to keep the steady pace throughout while sounding consistent. ‘Apocalypse…’ takes a shift from the guitars more towards the drums- they BLISTER on this track. If one is looking for the most ferocious black metal track the band has to offer, this would be it. While the riffs are still a little repetitive and mid paced, the drumming is certainly the highlight here.

Finally the album closes with ‘The Elohim’s Mark’ which is less atmospheric and more like ‘Source of Miracles’ as far as the band’s approach to the genre. Percussive drumming but overall that familiar tremolo picking dominates the music amongst the rasped vocals. The clean vocals are back though, which adds more variety to the track, otherwise some listeners might feel it tends to sound a little too basic. Keyboards are sprinked throughout but like in many of the other tracks, they usually sound buried so they can be hard to make out most of the time.

Argesh definitely have potential and depth to their music with their debut, the only big downfall is it is short. This feels more like an EP than a full length as it clocks barely over 30 minutes. Still, those who like black metal with a varied vocal approach, mid to slow paced guitar work, and still a raw sense of evil that doesn’t come off as cliché or overdone, then "Excommunica" is worth checking out for any black metal heretic who likes a sarcastic approach towards religion but isn’t overt or obvious about it. 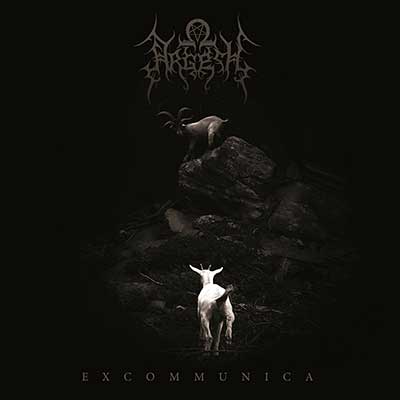