Starting out their life in the year 2015 from the Athens, Greece area and releasing their first recording, a self-titled EP, in 2016, Arkhangelsk burst forth onto the scene. Now, as of December 2nd, 2019 that is, they have released their debut full-length with "Advent" here. A re-imagining and adjustment of the style they started with in the beginning. While not a huge change, it is definitely noticeable. And what does Arkhangelsk mean to begin with? Well, "Arkhangelsk (Архангельск in Cyrillic) is a city in the Northern Russia." (Via Metal Archives) Now, some might ask; "Why would a band from Greece name themselves after a city in Northern Russia?" To which I would answer; "It sounds fucking awesome, so why the fuck not?" I'm sure they have their reasons for it but I think my answer alone is good enough.

Now, what does Arkhangelsk even sound like. Well, it is delicious mix, consisting of blackness of varying degrees and speeds. A compelling and intriguing take on black metal that marries many styles and influences into one cohesive and, in my opinion, gorgeous masterpiece of musical art. There is of course the influence from black metal that ranges from second wave to, the more modern, Casscadian. You get touches of some post-(metal, rock, whatever) with the whole heavy to light to heavy to light peaks and valleys that draw you in and always keep you interested. There are also some touches here and there of some funeral/death doom that make the hairs on your arms stand at attention. While those things written out like this do not seem to make sense, fret not. For Arkhangelsk know how to seamlessly piece it all together in a way that is viciously beautiful.

Multiple times while trying to start this review I found myself just being lost in listening to "Advent"'s vicious beauty and forgetting completely about writing anything down for notes or ideas at all. "Advent" is just that intoxicating good, period. It is an album that takes hold of you right from the start of the intro, titled the same as the album, straight on through to the last notes fading out on, album closer, "A Lucid Dream" and never lets go, even long after it is done. It is one of those albums the haunts you while you are not listening to it, imploring you to give in and give it a spin again. 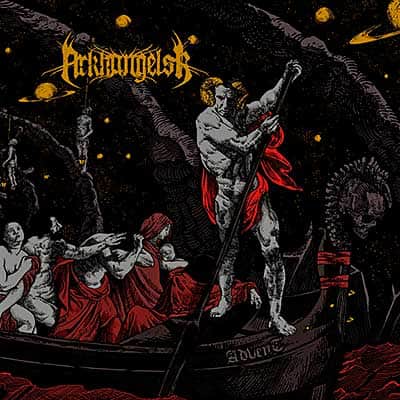