Armagedda hasn't brought up their original name for some time. After changing from Volkermord to their current title in 2001, and then splitting sometime later, the band must have been feeling nostalgic and chose to revisit the demo again, only this time adding little more juice and energy to their metal concoction. The demo itself is raw, minimalistic black metal. Expect plenty of buzz saw riffs, choking vocals, and rhythmic drumming. Armagedda carries a sound similar to early Darkthrone in the sense that it is raw but also sometimes catchy. The track "Mordinstinkt" is an excellent example of this as it burns away any sort of resistance for the listener to become swallowed by the music. While the production is very gritty and there's always the audible hiss of distortion, the work on the Volkermord demo is still praise-worthy for musicianship. The drums tend vary their beats every once in a while; sometimes they are brain dead such as on "Dödsnatten" and sometimes they actually sound decent, such as on "Kristi Barn." The guitars try to keep things sounding as dark and evil as possible with a bit of groove, and the vocals have the audible rasp that doesn't sound annoying, but can still sound very disturbed.

The several bonus tracks that are 'unreleased' are the real treat, however. For one, production has been changed so everything sounds clearer. There is a definite black rock n' roll influence through these tracks, but each one tries to display a different form of black metal while still being raw. "Find Strength..." is about as black rock n' roll as it gets with the dirty riffs and catchy drums. "Endless Fields..." slows the tempo down to create a depressive atmosphere, which is a different style for Armagedda but it works. "Oändligt Fruktbar Mystik" is a cacophony of noise- mostly guitar driven- but there's some muddled moaning and chanting in the background that is downright creepy and suits the atmosphere of the song altogether. The production is especially raw so the distorition is really turned up, but that helps shroud all the other instruments in depression. Finally "Dimvålnander" embraces the spirit of pure evil while still keeping that gritty production but offerng plenty of razor sharp licks and turning the vocals down to an echoing gargle, which adds an ethreal edge fo the music. Altogether, each one demonstrates black metal at its most twisted capabilities.

A darn shame these guys broke up, but they had a good run. With numerous demos and a few full lengths their legacy shall be remembered. Best of luck with their other projects and may Armagedda/ Volkermord rest in unholy peace. 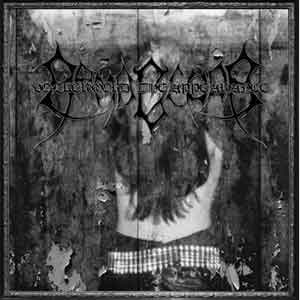