Armistice comes from the south of Germany and is trying to held the flag high of Germans 80 thrash metal. On this second album you hear thrash metal that is played solid with not too raw vocals and the obliged guitarriffing and leads. The kind of thrash metal Armistice is playing is a bit out dated. Back in the 80s it would have been cool but nowadays the modern thrash has evolved more than this Roots Of Evil stuff. I am not saying it is bad or played wrong but the impact is not so big anymore. The songs are solid, played ok and some good riffs. For thrash fanatics who stayed in the 80s. 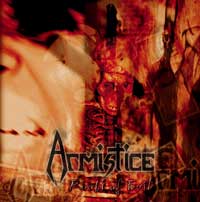 1. ChildSoldier
2. Rabies
3. Berserk
4. Nail Me To The Cross
5. Trail Of Fear
6. Leaving The Battlefield
7. Doggy Style
8. Return Of The Aggressor