Awaken Demons - From Heaven To Hell

Awaken Demons is a straight edge hardcore band founded in 2005. Most (four) of the members are from the band Sentence and one from Reprisal. The band recorded songs and inked a deal with Demons Runamok to release their debut album "From Heaven To Hell".
The ideology of Awaken Demons is friendshiployality and they carry that out in their lyrics. Songs that are sung by two vocalists and carry out chorusses with multiple vocals. Songs to sing along with. Tempo of the tunes are straight forward in fast tempo with moshbreaks. The complexity of the compositions are not too difficult and even predictable but their message is clear and they stand behind it to expose it. And that counts more than fancy stuff. But the outro is something more to fit on a hip hop album and I don't know if it is a sample from a movie. 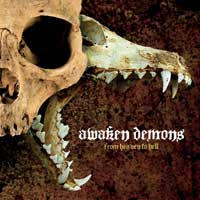