I have a confession to make... I never really got along with black metal. Now now, no need for tears, I know this is hard for some of you to wrap your heads around! But the truth is, anything that my fellow men played to me that they called "true" black metal ( or should that be TRVE?) was a painful experience for me; the blackened thrash stuff I quite enjoyed, bands like Desaster and Sarcófago are amongst my favourites of all time, but the purer stuff like Mayhem or Dark Forest always sounded like a recording of a cat getting put through a woodchipper. With a shitty mixing job. But then once in a while (but only once in a while), I'm proven wrong - I know, I'm shocked too - and I get some black metal sent over that's really pretty fucking good by anyone's reckoning, such as the In Satan's Honour split.

Since there are three bands boasting three tracks each, I'm going to cover each band rather briefly since a full summary for every track would have me here until next week, and that simply won't do if it interrupts my extremely busy masturbation schedule. Baalberith open the record with a pretty standard, but well executed black metal affair that sounds like Mayhem with a far more melodic tint to it. And, errm... that's about as much as I have to say about them. Again, black metal isn't one of my areas of expertise in the same way that thrash or death metal are so I find myself somewhat bare for relevant comparisons here. I will note that out of the three bands presented on this album, Baalberith seem to have the most chaotic production sound; it's rife with reverb and somewhat difficult for me to listen to in places... not outright bad, but it doesn't really come across as anything too awe-inspiring either. There are some rather epic melodic build ups that seems to struggle to peak occasionally, but as far as any sort of black-death sound goes, Baalberith are pretty competent with it and they're a decent enough act to kick off the split so long as you don't expect too much.

Hex Morbidity seem to have a slightly thrashier thing going on than the others, coming across as fans of Venom and Sodom with their approach to this new fangled black metal malarky that the kids are so fond of nowadays. They also boast the shortest tracks on the whole album, with the exception of Baalberith's first song, which is a bloody relief in itself (more on that later), but Hex Morbidity have a lot of charm to them in a bizarre way. They're as original as a cheese toastie, but they've just got a strange appeal that causes me to want more from them... maybe it's the thrashy stuff, maybe it's the kickass cover of Nunslaughter's Unbaptized, maybe I'm just being a tit. But Hex Morbidity's stuff is bloody great; though once again, the production leaves a bit to be desired as it's practically demo quality. But don't let that put you off.

Finally, we get to Forneus. These guys play their blackened death metal cards close to their chest and take very few risks, all the while throwing the occasional atmospheric doomy section in to great effect. Which has ultimately paid off for them since their tracks aren't only the catchiest (oddly enough), but they also boast the best production job out of the whole lot. However, while Forneus seemingly have the best production and songwriting, they also have the longest track on the entire CD that breaches the ten minute mark; you'd think that this would be a death sentence when I'm reviewing an album, but it just so happens that this isn't much of a detriment to their quality. Ten minutes is really fucking long, and naturally there's a modicum of repetition even on the shorter tracks, but these fellas have been wise enough to put a lid on it and know when to tell certain riffs and/or sections to fuck off and sit in the corner for a few minutes. Not entirely perfect, but Forneus end the record on a high.

So to sum it up: Baalberith's stuff is alright, but not for me; Hex Morbidity are oddly pleasing; Forneus are pretty good, but need some shorter songs in the future. On the whole, In Satan's Honour is a pretty bloody impressive representation of just how good some UK black metal bands can be and Satan lovers should most definitely give it a listen. That said, there's little here that will manage to persuade those who abhor the genre to throw on some corpse paint, burn a church, then fuck a goat. That's what drugs are for. 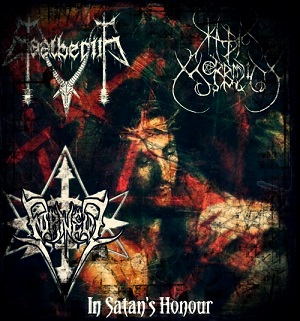