Backyard Mortuary - Lure Of The Occult

This has a perfect hollow sound; you know the old school reverb sound akin to the early days of the genre. But most of all that crunchy buzzsaw guitar tone makes the combination of the old and modern Swedish (reverb akin to Morbus Chron) and US (Death/Autopsy) death metal. You may even find some early incarnations of black metal unearthing positive punches of Australian filth. The CD version is independently released whilst Blood Harvest records will give this album the vinyl release and with that format you will gain much more pleasure due to its vintage sounding delivery.

Varying the pace with some slower elements a track like ‘Diseased’ ensures that you are not in total old school worship or tribute territory, there is some individuality and prowess that harks back to the alternative/underground Florida scene rather than concerning itself with the big three of that era and location. In additional to the wealth of influences already mentioned, there is some Martin Van Drunen influence in the vocals on the doomier tracks making this a combination of worldwide rituals, and these rituals are performed very passionately.

Debut releases of late have been plentiful in terms of quality and ‘Lure of the Occult’ certainly shines above some of the pretenders in this field. By taking stock of the full range of death metal out there over the last twenty years or more has reaped its own rewards. Backyard Mortuary delivers on many levels and the band provides a release that will suit a varied range of fans rotten desires through some torturous howls and guitar wailing screams of anguish and guilty pleasures. 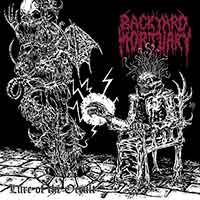