I was excited to hear this new EP from Spain’s Barbarian Prophecies as I had reviewed their last album 2013’s “XIII” for this very brutal site and loved it. The most notable thing on this release is that it is the first recording with the bands new front woman Alicia Chousa who it has to be said sticks many of her fellow female extreme vocalists to shame, just listen the drawn out roar she give towards the end of 'Secret Of Creation' and you will know what I mean.

'Remains Of Existence' starts off with a soft melodic introduction before kicking off into a standard thrash/death number. 'Secret Of creation' is more mid tempo but two later songs are where the gold is. 'Fathers From The Stars' is melodic and moody and builds up nicely to chugging groove which throws in a nice solo towards the end, this reminds you how the band are at crafting a great song  but 'The Answer' is where things get really extreme, it’s easily the heaviest track on the EP. It’s a shame because things finish when it really feels like things are starting to warm up.

It’s hard to draw comparison to the bands last album with this release because “XIII” was an hour and 10 minutes while this is just over 15, we have four songs to wet our appetite so I’m guessing this release is merely to welcome and introduce their new comrade and get on with a full album. The problem is with “XIII” Barbarian Prophecies had their own sound, granted they weren’t the most innovative of bands but they had a dark take on death metal with a dash of melody for good measure and  it was rough round the edges, the four tracks we have here are very generic and standard sounding. You really could be listening to anyone.

The jury is still out until a new album is released from this new line up and hopefully they will match their previous efforts, until then just treat this as a stop gap. 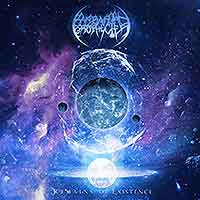