There was a fair share of hype from the Metal community concerning the release of this the new Baroness album called "Blue Record". After all the last album "Red Album" saw a shift in direction and now with new guitarist Valkyrie's Peter Adams, did that mean another change in sound for the band? The answer is they have indeed changed again, this time in a more Progressive Metal direction unlike the more Sludge Metal style they had before. Baroness continue to make Metal epics surrounded by atmospheric interludes, but this time around they do it with a bit more of a Progressive Rock edge. They do this by bringing in a lot more influence from early progressive bands like Led Zeppelin, Pink Floyd, and Yes. While this might upset some old fans, Baroness actually do make it work quite well. The album kicks off with "Bullhead's Psalm" which is dark and ambient before moving into "The Sweetest Curse" which is really the only track on the album that sounds like the older material from the band but this album contains a lot more experimental passages than previous efforts. This point really stands out in tracks like "Steel That Sleeps the Eye" and "Blackpowder Orchard" that features everything from Folksy sounds to dueling guitar melodies. The interludes play a important role on the album as they act like the glue that holds the other tunes together. "Steel That Sleeps the Eye" acts as a prelude to "Swollen and Halo" and it almost sounds like an acoustic ballad directly evolving into a progressive metal track with the way the two songs are structured. The feedback in "Ogeechee Hymnal" blends right into "A Horse Called Golgotha". "War, Wisdom and Rhyme" is arguably the heaviest song on the album and is my pick for the best track but its a album that you get a different vibe from every time you give it a listen. One thing that sets this apart from the "Red Album" is the drumming which at times almost has a disco rock feel about it but don't be put off, this is still a heavy record but this no Sludge Rock album. This is a mature, complex, rewarding album that could over time fit comfortably alongside the arena rock of the 70s and 80s and while some of they have lost some of their heaviness, they have made up for it by making something is denser in sound but also more artsy. Nothing is stays the same here, there is a many changes in atmospheres, and even John Baizley’s vocals are not a constant, but are used as one more instrument in the band that actually chooses to lead the band in one direction, only to be pulled into another direction by the sometimes haunting guitar work. Baizley is a good singer, but it might take a little getting used to, but personally, I really enjoy his voice.He isn't really a screamer, but there’s nothing soothing about his singing either and the lyrics are something else again. I haven't got a clue what "Jake Leg" is about, you can try and figure that one out for yourself. What makes Baroness's music so compelling and satisfying is the sheer eclecticism and focus on musicianship that makes the album work. It is still very melodic in parts but it also contains some ominous, sustained guitar tones which is very suspenseful in parts. Of course, there are machine gun drums, technical guitar play, but there is also a lot of mind-blowing psychedelic jamming. Baroness is truly one of the most unique bands in the business, defying simplistic labels and expectations and "Blue Record" is a must-have for any fan of the band and for anyone that digs heavy and well-crafted music. I still rate the "Red Record" a little higher than this one but this is damn close. 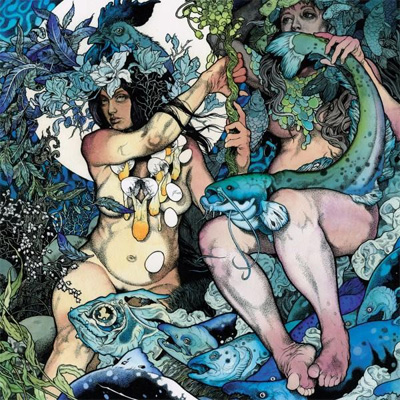