Non-convicted serial killers BTK have made some noise of recent times, not only supporting death metal legends including Avulsed and Desecration, the band have themselves have received good tidings in the press. Upon first receiving this release, I was convinced it was going to be another “slam-death” effort. How wrong I was. Whilst ok, there are elements of the brutal style, BTK have an approach to their murder scenes by way of classic Florida death, some Swedish rotten death and all things in between. The guitar tone reminds you of the rotten genre, there is frantic drumming from the talented individuals on the limit of physical endurance, whilst the arrangements groove, grind and pinch harmonize themselves into a package of complete obliteration. ‘Outback Murders’ leaves no stone unturned or no respite in your audible listening pleasure, the sound samples added enhance the story and atmosphere but are not too intrusive to overpower the tracks overall stance. You can hear the musical influences of Entombed or a similar band during ‘The Burner’, there is a certain undercurrent of groove and cohesion. Then you get to the ripping solo work leading to an increase in momentum akin to some Gorgasm work. But one thing that never leaves you is the tight groove. With the band claiming an “equal opportunity policy” when it comes to murder, all you listening victims will go with a smile on your face and a sore neck, there is plenty of promise. ‘Priceless Life Death Art’ stinks of good rotten death; ‘Crucifix Sodomy’ entraps you into a world of pain, but what a place to be a part of if the truth be told.

BTK display flourishes of groove, technical proficiency and manage to produce arrangements that wet the most stubborn death metal fans appetite. It is a mature release; there is no reliance on childish gore, only murder most foul! The execution (no pun intended) is solid and has long lasting foundations, couple that with the expulsion of effortless speed, these are strong accolades that should be heralded. 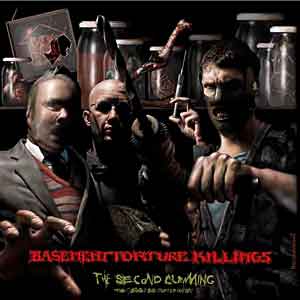