Bastardhammer - 10 Counts Of Fuck Off

These London death/crust monsters made an amazing impression on me when they played recently at London Live Evil festival late last year. On the surface they appear to be full of energy, humour and mischief, but this music is deadly serious. This is like a jackhammer being applied to each and every individual joint in your body, its brutal.

‘Poser Disposer’ has a touch of crusty death metal that’s laden with booming bass sounds coupled with a great vocal representation and some harsh dynamics. Whilst a track like ‘Kebabylon (Fast Feud)’ has much of the same but ends with some nice sludge and feedback that certainly keeps your attention high and the arrangements inviting and certainly not of the same premise. If crust is what you want then you are going to want to hear ‘Connoissewer’ as well as the delightfully titled ‘Shit Off’. You may wonder about some of these track titles so what I will say is that the word is that these guys don’t take themselves seriously, but man, this is far removed from mere humour and it would be unfair to dismiss this band based on first impressions alone. I feel you have to understand British comedy or rather British parody more to the point to really appreciate this band and I really hope that does not limit their fan base. Musically this is done with style, the inclusion of occasional dual vocals also adds a further dimension to their arsenal and gives the listener further muscular spasms that is undoubtedly buried in the ways of the old school death/crust masters.

Essentially, filth and grime will surround you when you hear this, you will want to smash the life out of stationary objects too, Fenriz approves this band, I approve this band and release, this is something different from the clutter of bands releasing tried, tested and safe material of late whislt claiming old school credentials. This is dangerous, this is something to stick your teeth into and then get them kicked out in the next breath especially if you take the releases title to heart.

These tracks are available for download for very little cash at Bastardhammer’s bandcamp site, so head over there, have a listen and make a contribution to this fresh and exciting band’s music. 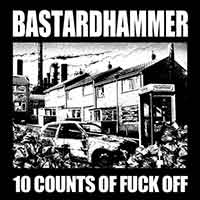