Each band are pushing two tracks into your guts. Both bands are well known in the underground. Bastards Saints opens with their sick death/grind. The two songs have the snapping bass sound with the twisted vocals over it. Songs with a lot of tempo and mood changes. Nefas has the honour to finsh the job with their hyperfast brutal death. The drummer is on speed and storms tru the songs following by the the brutal vocals and the smashing guitars. So four songs out of these Italian top scene and not a bad choice to buy. 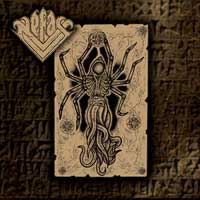