Cold. That is the way to describe Battle Dagorath's second album. Every track here is wreathed in an icy blizzard of distortion. In fact, it sounds like it was recorded up on a high mountaintop with the swirling wind samples in the background amongst the guitars and drums; one can barely hear anything. The wintery samples can be easily seen as an influence by the member Vinterriket, who performs a similar style of ambient black metal, but is more focused on the acoustic and atmospheric sections. With 'Ancient Wrath,' it brings down the fury of mountain gods in a sonic blast of chaotic black metal that just obliterates track after track. Sometimes it may feel like the atmosphere is too harsh, though, because it makes it very hard to hear. On a track like "Spellbound Requiem..." it is just a sheer plate of noise with too much distortion and not the most enjoyable.

Other tracks like "Empire Of Imperial Shadows" has a more distinct sound. It is still very chaotic but one can pick up melodic bits, especially in the middle where there is a great amount of acoustic harmony, much in the style of Satyricon's earlier music. "Kingdom Of Black..." is another ambient piece, but again it is difficult to hear anything except an audible buzz; rather than a winter storm, it feels like an avalanche. The final epic that is almost twenty minutes, "Ancient Spectre Of Oblivion," is for the most part a heavy, aggressive track that just bleats away, but near the end settles out for more lengthy, depressive sounds much in the vein of Xasthur. It's a nice change, but drones on and on with the same three or four notes without much change while the vocals are even more clouded over to a haunting effect.

As a result, fans are delivered some pretty dissonant music that will appeal to fans of the gritty, purely atmospheric kind. However, sometimes the distortion largely takes away from the musical side and it can just be a giant snowball of noise. For those looking more for the melody in black metal and a clearer sound might want to steer clear of this, as there is no clarity really in the music at all. But, that is part of the beauty when listening to the heart of nature... of chaos. Sometimes heavy and thick coats of atmosphere is best. 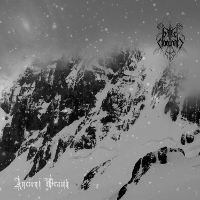 Label: http://www.cold-dimensions.de
Reviewer: Colin McNamara
May 14, 2011
Next review: Dodsferd - Spitting With Hatred, The Insignificance Of Life