'Global Attack' is the sophomore effort from Czech Republic's Deathheads: Be Fading Fast. The music is brutally uncompromising but also chock full of melodies interwoven in the interludes of every song so it doesn't feel like a complete speed through of boredom ("Deathward" is a perfect example of how beauty and brutality mesh). Think of this as if Deicide's music was set to the vocals from Immolation and one has themselves the bread and butter for Be Fading Fast. Other tracks show no mercy like "Holy War" which just churn away guitars at top speed with the drums pulling a few Thrash elements; the spoken word sections might have been unnecessary but it is an aesthetic touch and the militant tone matches the chugging sections once the vocals come in. "Bleed Slowly" takes things in more of a balanced direction with a strict chug format but keeps more rhythm and the pace as even as possible aside from the drums which are fast as ever, but doesn't make the music sound like it is trying to out-race itself.

The only main downside to this album is how brief it is. With only eight tracks and each track about three minutes and thirty seconds long on average, one barely has themselves a half hour of music. However, short albums- if done well- can be memorable, and 'Global Attack' is one of those albums. A Death Metal album at heart, fans of the genre will easily find something to love about this, purist or not. The more melodic and thrashy tones of a track like "Behind The Window" might appeal to Thrash fans if they can stand the grating growls which aren't always standing out with the music, but are solid enough through the production to be heard. Listeners can certainly consider this short but sweet, if not slightly typical. 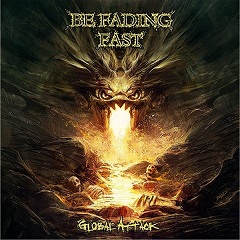