When one thinks of raw stoner doom rock with a mix of hardcore, think of Germany's Beissert. After their successful debut, Nothin' Left To Love, the band decided to make their second album darker, but hit just as hard. The Pusher is still gritty and still rocks the earhole, but one can certainly hear more intricate melodies and even a bit of melodic metal with the vocals. There's still plenty of angry shouts going on, but Beissert also use cleaner vocals to match them and add more groove than aggression to their music.

The title track basically sets the standard. "The Pusher" is heavily aggressive with all the hardcore screaming, dirty riffs, and slow, doom metal set passages. However, the clean vocals add an interesting aspect, especially since they sound like Matt Barlow of Iced Earth. The low, almost mournful vocals add extra 'stoner' quality to the music rather than just sheer, hardcore aggression. However, mostly expect hardcore aggression from tracks such as "Unaussprechlichen Kvlten" and "Aal ins Gekroese."  "Die Dunkelheit uns Mit Sich Nimmt" has a bit more rock inspired groove rather than hardcore, and chugs along easily until it breaks for a solo. The distortion blocks the sound out somewhat, but it is still a groove laden track. "Die Fabelhafte Welt der Agonie" is the only instrumental, and though it is barely a minute long, the music sounds nothing like anything else on the album. It is soft, piano melodies that one would hear from an ancient music box and will certainly confuse listeners... at least until the last track.

"SaxonBloodRock" is the philosophy song for Beissert. With a crunching chorus and chanting backing vocals, this will certainly be an anthem. "Durch die Haare in das Kind" is a bit more melodic than the most with how the riffs start out. Instead of just going with slow, buzzing chords, there's instead a catchy strumming gig going on, and when the vocals come in with the unique backing vocals, one has themselves a unique track, for Beissert's standards that is. This is the most stoner rock influeced track on the album, drawing influence from bands like Queens Of The Stone Age, partially due to the higher pitch of the vocals which hasn't really been seen before.

"Eerie Discipline" is slow, and focuses more on picked strings and soft drumming with cymbals rather than just chords and riffs. Atmospherically, it is great, and with the shouting it sounds like there is a bit of Neurosis influence in there. "Yggdrasil" sounds a lot happier than it should be, almost too happy. Even with the aggressive shouting and cutting distortion, the way the music is structured makes it sound like a victory song one would play at the end of a 'sports quest' film. Fortunately, "Bloodsown" erases any notion of cheesiness and brings things back into the darker crunch of Beissert's usual mood. It is the track "Gedanke und Erinnerung" that takes the cake, however. Spawning as an eight minute epic, it weaves and crunches like a slow doom metal with upbeat vocals before opening up to some pretty harmonic solos that are almost sound like progressive metal. It's much more flamboyant compared to all the other tracks. Finally, at the end that short, piano melody is heard again that was heard on track 3. Trippy placement.

For those who liked Beissert's first album, the second album will probably be loved even more. For new fans, it might take some getting used to. Although the album is more diverse, many of its qualities are typical stoner doom/ hardcore prog in the vein of Floodstain, Gates Of Slumber, and even Isis. It is either a hit and miss when it comes to listening; usually a full listen through will really give the scope of the band rather than just skipping around trying to find a general basis for sound. Lots of tracks sound the same, but the ones that sound different are worth checking out. 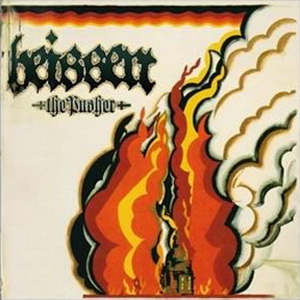