This album over time has become one of my favorite albums. It’s a well hidden gem in the death metal underground.

Originally released in 1992 and produced by Dark Angel’s Eric Meyer. Eric also does a bit of lead work here and there on the album also. It perfectly mixed the harsher end of thrash metal and death metal with slamming neck breaking sections on 'Criminal Ecstasy' and scorching solo’s

Granted it’s not the most original of albums, 'Human Abattoir' for example has the exact riff of Death’s 'Born Dead' for example but it really doesn’t matter it’s so infectious and fun to listen to and what it lacks in originality it more than makes up for in its execution and passion. This band meant it. This album oozed potential and one can only wonder what would have happened had things turned out differently and the band went on to record more material.

This new edition on Chaos Records (dedicated to Paul John Mallory who passed away in 2013)comes with alternative artwork by the same artist Raul Pacheco Cabrera who did the original. It has been remastered by Dan Lowndes from Cruciamentum and comes with two rerecorded tracks by the bands new line up. The band reactivated in 2014 with original members Gullermo Anaya and Armando Mondragon. The new recordings sound quite different to the originals and have a much more modern brutal sound. New vocalist Franco Munoz has a deeper more guttural approach to Paul’s scratchy harsh barks. It’s very different but it gives you a bit of insight into where the band are today and gives you a little preview of the direction the band are heading in.

This is a fantastic record and I urge any death metal fan to invest in this brilliant reissue it essential to your collection and for those who have it already I bought this new edition and both editions complement each other brilliantly so it’s well worth reinvesting also. 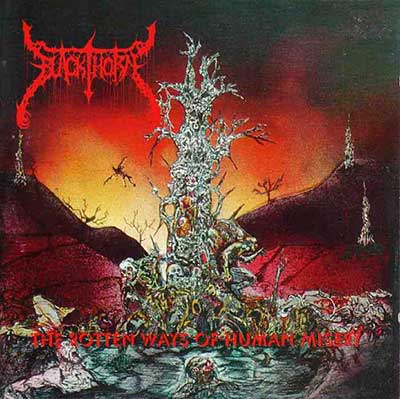