Blasphemous - Bearer Of The Darkest Plagues

It isn't very often that a black metal band breaks from the fold of usual blast beast, snarls, and evil music, but when they do, it is definitely noticable. Blasphemous makes their mark by taking a more melodic, groove based outlook on black metal. It's still grim, still evil, and still downright disturbing, but for once the sound actually makes one want to listen to it instead of passing it off as 'been there, done that.' Hailing from the U.S., they started their career in 2003, but didn't release their debut until 2008, giving them five years to really shape their sound. Suddenly it is 2010 and they've already got a new album out. Fans might have been skeptical at first because of the 'rush of time,' but after a listen of 'Bearer Of Darkest Plagues,' one can definitely say that the band is still on top of their game.

The moment the opening track, "When The Darkest Storms Surround," listeners can definitely tell this is a melody based black metal album. Sometimes it sounds like melodic death metal, and sometimes more groove based black metal, but the sound is so well mixed and fresh that no one can pass up this track. Sure, there are a few more straightforward black metal tracks such as "Path To Our Demise" and "Raped Upon The Altar" where the blastbeats from the drums and incessant tremolo picking can start to get nauseous, but overall the production doesn't keep everything fuzzy or faded, so everything can be heard. The vocals are downright evil- a raw cross between Shatraug of Horna and Morean of Dark Fortress- and add the perfect touch to conveying the Satanically arousing lyrics. The most interesting track on the album is "Decimators Of The Holy Manifest," a very slow, moody track that has almost a doom metal sound to it along with tons of melody from the single string pickings. There is no other track on the album like it and it really sets a new standard for Blasphemous.

This is one very fine black metal album, and a great choice for fans of more intricate bands like Satyricon, Deathspell Omega, or Azaghal. The melody parts are still pretty dark and don't sound harping or cheesy through the use of overused female vocals or keyboards. Boil everything down and it is still very raw black metal- just guitars, vocals, and drums. What Blasphemous really have going for them is the tempo of their music; they change it on each track so one hearing isn't the same thing over and over... for the most part. True, there are some repetitions here and there, but for those who love an equally balanced band, give Blasphemous a shot. 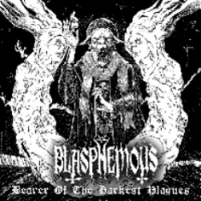