After years of silence, Finland’s death grinders Blastanus is back in action! Their music can be described as a cross between Behemoth and Aborted and it hits hard, but with a few surprises here and there. Described as ‘sax grind’ one can expect something out of the ordinary, even after a 10 year absence between albums. One can definitely hear the Aborted influences in the vocal style and the pace/ aggression of the music when a track like ‘Anomie’ or ‘Obsolete Man’ hits the ears. It chugs, it slays, it downright stomps the ear in. But it doesn’t do it in the churning Cannibal Corpse sort of way nor a hyperblast shred of a group like Archspire. The death metal style is more something in between. Yes it is brutal, but also technical, especially when it comes to the solos. The melodic touches on the guitar solos among the spoken word samples help break up the furious pace of a track like ‘Obsolete Man.’ Whereas tracks like ‘Anomie’ have no respite whatsoever.

The surprises come from the saxophone on tracks like ‘Crimes’ and ‘Uroxicide.’ Few bands like Wound Collector, Rivers Of Nihil, and Ihsahn tend to employ saxophone, and there is a fine line between tasteful and overdone. Blastanus feel like they are being a little bit overly cautious in their choice, and it would have been great to see them use the instrument more. Still, these few bits really help elevate their album “Beyond” from being just another run of the mill death metal album. The group tries other things too like the slow churn slamfest ‘Final Acquitance’ which brees and vomits it way through with a very different style and pace that is begrudgingly slow; almost alien to what fans have been treated so far. Now suddenly it feels like we’re touching on a Cordyceps album here. Still, another nice twist for Blastanus.

Then there is a Segway from ‘Acquitance’ to ‘Confined Reality’ which ties the technicality of the solos together with the furious pace of some of the other tracks. Almost like a lengthy instrumental with limited vocal work, once can really appreciate the guitar, bass, and drum work without feeling overtaken by the loudness of the vocals, which still bellow their way out. Overall, the growth gap between this album and their previous one back in 2011 is still pretty big. While ‘Collapse’ was more the straight forward approach to death metal with a still restrained saxophone in the vein of Deicide, here ‘Beyond’ breaks the chains and expands on where ‘Collapse’ left off.

Yes, the group still feels like they are playing it safe, but they are definitely branching out into the more tech death department with some more nods to progressive and slam, making their sound much better. Certainly worth checking out for those who enjoy death metal hard and fast but with excellent guitar solos and ferocious vocals that are difficult to discern, but not as brutal on the ear as one might expect. 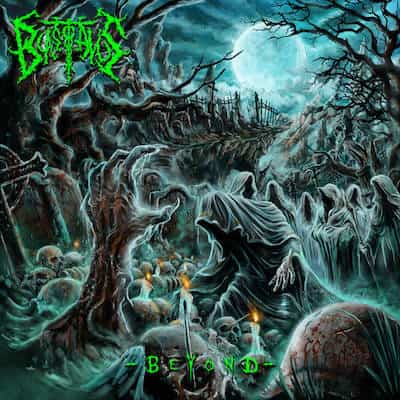