This is the second album from one of the oldest BM bands in France. Hailing from 1993 they released 3 demos, the first album "Melancholia" and now their new one "Par Le Sang..". An album full of dark, strong and facinating songs. A lot of variation in the songs, fast parts that are interrupted but slow mystical spheres. Some lyrics are in French to give it an extra dark touch. Great and clear production.

Surely one of the darkest BM albums released this year. 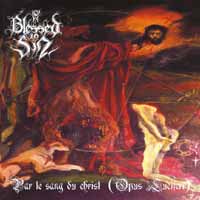