The Netherland’s Bloodphemy is back with their fourth full length album, “Blood Sacrifice.” Continuing on their path of heavy death metal, the music here is fast, grim, yet clear enough to enjoy in the vein of the likes of groups such as Immolation or mid era Morbid Angel. While there isn’t anything new here, the band opens with ‘Last Cry for Humanity’ which is rather atmospheric and a good way to start the album with the rantings and ravings before crushing in with ‘House Of Souls.’ This track steamrolls with the guitar and drum pace; the band knows how to write riffs, even if they are repetitive. The growled vocals fit the atmosphere perfectly for a grim, yet clear sound and also being somewhat discernable. Other tracks like ‘Sin’ aim for a bit more of a focus on the slower, doomier riffs and darker tones, but still remain heavy and crushing in their guitar solos, much in the way a Bloodbath track is designed.

‘Flock Of Lambs’ tries to bring in the atmospheric elements more and this is probably one of the more engaging tracks with the guitar tones that Bloodphemy try to create. They rise above the standard chug fest that so many other death metal bands fall trap to (and a lot of the tracks on this album unfortunately), but thankfully this one between the guitar solo melodies, varying paces, and overall darker tone really brings out the whole “Blood Sacrifice” tone of the album. 'Revelation' follows suite by adding in the semi spoken word elements heard on the opening track and what also sounds like atmospheric female vocals added in the background, but overall the effect is lost in the heavier moments of the track. Still, it brutalizes the ear and stands out compared to some of the other ones. Then we fall back into the more standard death metal fare with the likes of tracks such as ‘Conviction’ and ‘In Cold Blood.’ These tracks aren’t boring due to their heavy nature, but just don’t quite have the riff tones or patterns to grip one as much compared to a track like ‘Flock Of Lambs’ does.

‘Derogated Salvation’ does bring more atmospheric elements to the table. Adding in keyboards and a more sinister tone amongst the groove laden guitars, this serves as an excellent closer for the group. It crushes, yet adds some tasteful moments that work with the music rather than against it. The closing piano, despite being buried, is probably one of the better elements of Bloodphemy’s atmospheric choices and while not used on the other tracks, makes this one probably one of the most memorable. Few bands can incorporate piano in a tasteful way and Bloodphemy does it with great effect; hopefully they will do it more in the future.

As a result, The grim and eerie “Blood Sacrifice” is perhaps the band’s strongest offering yet as it stays true to the crushing death metal that the band has released so far in their career, but tries to incorporate more elements for a rich, atmospheric sound without over doing things. 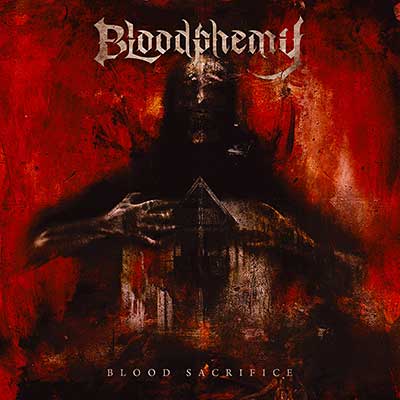