Universal is Borknagar's eighth studio album, and it still holds true to the style that the previous albums were done in (not counting the acoustic "Origin). Those who are new to Borknagar will find that the band is a progressive black metal band using lots of layered harsh and clean vocals, tons of keyboard and flute melodies combined with lots of good guitar riffs and a drumming that doesn't sound amateur or like it was done by a drum machine. Compared to the last few albums the band has done, fans will notice that Universal is a lot more atmospheric than the previous albums, heavily focusing on keyboard use and vocalist, Vintersorg, expansive voice. He sings a lot more than his usual traditional back metal rasp; hopefully fans will find it very appealing.

Musically, Universal does a good job at keeping up the the progressive metal formula. Most of the songs start out with an acoustic guitar or flute introduction before going into a more mid placed black metal vibe with the guitars and drumming, but it isn't as fast or groove laden as something you'd hear from maybe Satyricon or Emperor.  The fantastic guitar melodies are handled mostly by  Oystein Bruns and Jens Ryland. Oystein and Vintersorg have a musical history together from other projects, so it is good to see the two still able to create wonderful music. The keyboards, handled by Lazare (who seems to do a multitude of the more amospheric instruments on this album), are always present as a shadow of the other instruments; sometimes this can get a little overbearing. If Lazare had maybe added more constant flute throughout the songs instead of just the organ or keyboard wail, Universal might have been a stunning achievement. The drums are also well done on this album by David Kinkade who switches between a black metal pounding to a more jazz laden tap.

There are a few new elements on Universal compared to the others; Bornkagar took the time to have the backing vocals put more emphasis on the atmosphere. Usually the other members of the band aside from Vintersorg provide this, and it works to a great effect. "Reason" is an excellent showcase for this in the sense that the backing vocals create a choir effect that goes well with the keyboard (which sounds really good at the closing of "The Stir of Seasons" for the piano effect). Also notable is the last track, "My Domain," where former Borknagar vocalist ICS Vortex (most know him from his work in Dimmu Borgir) lends his operatic voice to the scene. He still sounds very good; almost as good as Vintersorg and demonstrates how much he has matured since his last album with the band, Quintessence. Considering his departure from Dimmu Borgir, there is a possible bright future he could once again become a part of the band as co-vocalist with Vintersorg; wishful thinking.

Ultimately, if fans of Borknagar liked the album Empiricism and onward, then Universal will find a spot right on the shelf. It's all progressive black metal grandeur with little hint of the detour of acoustic work that the last album, Origin, had, save for the more atmospheric elements with the flutes. It is an expansive album to really get people listerning and thinking because it is so complex at times with all the instruments ringing together.  A must have if someone doesn't mind a lot of keyboards being present. 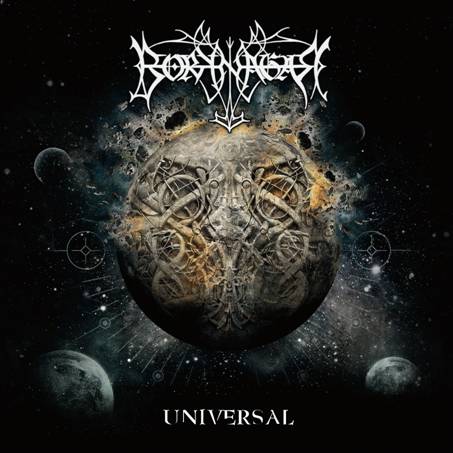