With YouTube kids doing their history research and the resurrection of vinyl and all the reissues that came with it or the underground merchants and their constant search for the under rated, either way the tide has turned and the criminally over looked Brutality are getting the recognition they deserve. While they may not have been the most innovative death metal band they were always consistent in terms of quality and they always had their own unique take on death metal, they never followed trends and one thing most people forget is that they were there at the beginning!

Following from a series of re-issues and 2013’s "Ruins Of Humans" EP the band have returned with "Sea Of Ignorance". In just 8 tracks Brutality have delivered a strong diverse slice of death metal. Opening with the title track things are summed up nicely in this track alone, it’s brutal, there’s strong riffs and shredding and there are blistering solos and even a bit of melody when needed. Every track is thought out and concise, they open with the two longest tracks, the second being '48 To 52' which tells the tale of the black plague in London. Starting off with a slow doom introduction and building to a strong melodic yet bleak chorus. It’s the albums flagship song. After that, the band don’t go other the 4 minute marks, blasting out track after track of…… well, Brutality!

To sum up, this is an awesome album, each track stand on its own and each track is fresh and full of passion and heaviness and memorability in equal measure. We also get a cover of Bathory’s 'Shores In Flames', it’s one of my favorite songs from one of my favorite albums and it’s a great cover don’t get me wrong but it feels a little out of place, maybe they should have stuck it on at the end I’m not sure but that small niggling issue aside "Sea Of Ignorance" is death metal pure and simple done the classic way, the right way. It’s not old school it’s timeless. 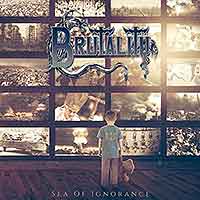