I'm pretty bloody sick of brutal death metal at this point. Over the past ten years it seems to have become the norm to do the exact same thing that every other band and their sex slave is doing; tune low, chug, pinch, squeal, add some stupid sweeps in there, and have ridiculous lyrics and I'm just sick to death (no pun intended) with the whole thing. That's not to say that all brutal death metal is bad, but the genre is so samey and generic now that it makes even the worst look-how-fucking-old-school-we-are thrash metal bands look like Pink Floyd, so I tend to stick to my classic death metal bands such as Benediction and Dismember for my brutality fix. Still, that's enough ranting for today; this is a short review for Cancerous Womb's full length album.

The first thing that's apparent here is that there's not a great deal to say aside from the fact that it's a brutal death metal record that's less shit than some of the other abortions out there. "Born From A Cancerous Womb" is probably one of the better releases of it's kind I've heard lately, but it all feels rather flat and unappreciative of the listener; the kind of album that'll have sex with you until it finishes, whether you came or not, and then won't bother to call you in the morning. It has catchy riffs in places and it ticks all the heaviness boxes, but it just feels so insubstantial and unsatisfying overall - mostly because everything that's presented has simply been done so many times before, and much better in some cases. It still suffers from the genre's main problem of simply blurring into an unrecognisable mess at times, making it difficult to know whereabouts you're at in the song (or the album, for that matter) and having put the record on one afternoon, it simply became white noise after only a few songs. Granted, fans of the genre probably won't notice a great deal but to anybody else this is going to make the record come across as impenetrable.

But as I said, it's got some good stuff too, especially in comparison to some of the utter shite that the genre spits out nowadays. There are some pretty good riffs that have some of the early ninties death grooviness to them, the album has a nice production job that's not 100% over the top batshit mental like so many other bands in the genre seem to take pride in, and it has that consistent heaviness that, surprisingly, helps with the album's flow overall. Normally, having non-stop chaos would be detrimental as there's nothing to contrast such a sound in order to appreciate it more, but here it seems like any attempt at such a thing would just break up the album's vibe. Still, this isn't a completely positive point because "Born Of A Cancerous Womb" is an album that only fans of the genre will be able to appreciate properly; I'm somewhat startled that I'm writing a summary for it since this sort of music really isn't my thing, but I didn't absolutely hate it. Its just... it's another album that's difficult to write about effectively because it's just on such a boring level of averageness. Having said this, despite it's flaws, it's generic approach and it being far from the best of it's kind, you can do a hell of a lot worse than to check this one out if you're a fan of brutal death. If you're not... well, stay away from it because this isn't going to change your mind much. 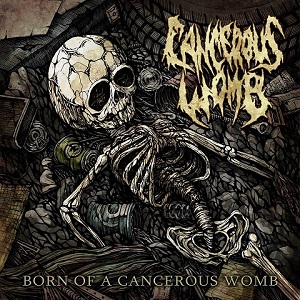