Cancerous Womb - It Came To This #2

Edinburgh, Scotland is home to one of the most intense extreme metal bands out there right now, Cancerous Womb. With a name as brutal (and brave) as that, you can only imagine what the actual music sounds like. Well fear not, this brand new EP is nothing short of great death metal. In fact, it's got a lot of grind influences, possibly taking their sound along the deathgrind route.

The riffs are funky, almost trendy and weird, but it works. You expect something brutal over and over again like a constant punch to the face but instead you're focused on the bizarre, yet oddly satisfying wackiness, 'Formless' executes this perfectly with an array of abnormal instruments. Whilst this track is short, it only adds to the EP's diversity.  Spiralling out of control, the craziness is based on the guitar and bass. The vocals are mostly composed of death metal yelps and barks, but these are not the focus point on the EP, probably the least actually, as the instrumental side of the EP truly surpasses any original expectations.

'Isolation Frenzy' is balls-out nuts, bat-shit crazy like a hurricane attacking a Game Of Thrones wildling giant, but it's got a long way to go before it reaches the peak of EP finale 'When All Is Said And Done', a perfectly executed cover of Napalm Death's 2006 classic. This track boasts of the band's frantic style, and overall implying that Cancerous Womb aren't just a pretty named generic brutal sounding band. There's alot more to digest in overall when it comes to this exciting deathgrind outfit, and by the end of the short EP we're only craving for more. 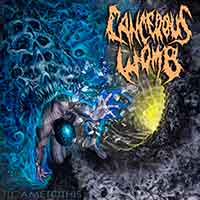