Another great contribution by the WHOLE band! Everyone worked greatly to making this an outstanding one for 2020. The vocals fluctuate which makes it more diverse and dynamic of an album. It's surprisingly shorter than most of their LP's (if not all). That doesn't take away from their contribution to metal here. This is all in all pure death/rot. The guitars are still in B-flat so there's still that "chunkiness" to the songs. Tempos vary a lot here which is cool. And the leads were shriek-ingly intense. Technical, but loud! It seemed like they had a lot of ideas here to bring for to stage. And the riffs were really groove laden. It's definitely experimental album in that sense it's atypical CA.

I've found some really interesting tracks to be 'Naegeric Outbreak' and 'A Call For Violence'. But I've located all the tracks to be pretty good, so I'd recommend these first to check out on YouTube. This album is available on Bandcamp or Spotify, a lot of the tracks are also on YouTube. I've found the whole album on Spotify, but I'm to get a physical CD of the album when they're available. It always sounds better through my speakers than my iPhone. I prefer CD over digital and the fact that you're supporting the band. I think ever since the beginning of CA, they've always stayed true to their roots. They've stayed death/rot metal and continue to stay.

The overwhelming variety in the music makes this to be one of their best. I really admire the riffs and the different tempo changes throughout the album. Adam knows how to write some killer riffs. Always a bad ass in the guitar department. It's been a great experience to know some of these guys in different preferences of musical tastes. The production quality is raw-like in respect to how the overall sound is. The mixing was done well too and everything sounds good in that respect. It's always great to hear interesting metal. This is one of my favorite CA albums (by far) though I just had wished that it was a bit longer. That's alright though. It's still a great listen to!

Show the band some support on Bandcamp getting the digital music or when the CD's become readily available, purchase them. Keep the spirit of the pure death/rot metal. Another album done and these guys totally nailed it. I totally respect the band and what they put out musically to the metal community. And being a native Chicagoland band puts them in the ranks of top notch to this day. Having heard bands like Cianide, Blood Of The Wolf, and Everdying I've had to just say that they're the ones who've dished out the most recordings and consistently. If Cianide were able to put out more music, they'd be among the top ranked in Chicago. CA is among them. Buy their music! 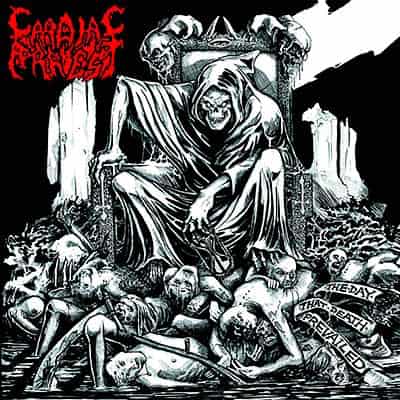 1. Thrive On The Fear
2. Naegelric Outbreak
3. Birth Of Hideki
4. Plague Ridden Destiny
5. A Call For Violence
6. Eradicate The Masses
7. Endless Dread
8. Sodomite
9. Up From Oblivion