CIAFF - The Southern Command Of Violence

Italy not only known from Pizza and Mobsters but now a point on the map for brutal maniacs CIAFF. A mixture of brutal death, hardcore and extreme hip hop. CIAFF delivers highly structured crossover songs that makes you jump, slam, sing along etc. Including a cover from Blur! Enrico (from the brutal core band Undertakers) is doing the vocals, Butch (ex Undertakers and now in 4 Dear Life) plays bass/guitar and Danielsan is trying to drum. If you want uncompromising hate and disgust and lyrics that are not politically correct you sure have to get this album! Also try to find the titles of the movies that were used for the intros. 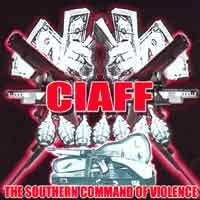