Commander - The Enemies We Create

Commander comes from Germany and they’ve been around since 1999. For 7 years they’d been working on their music and tried to make their name known by supporting live bands like: Six Feet Under, Dew-scented & Equilibrium. Finally they release their 1st full-length “Worlds destructive domination” in 2006.

Now, the album I have in my hands, is Commander’s 2nd attempt to destroy your ears. Just released (2008), “the enemies we create” is a nice mixture of Euro-Death Metal & US-Death Metal. Commander manages to create a really heavy & desperate atmosphere, through hyper-weight riffing, nice (but few) leads & really strong vocals. All songs are mostly mid-paced, but there are some blast-beat injections here & there, to keep you focused on Commander’s assault. A few acoustic parts just reinforce the whole feeling of dark epic & despair. Should I refer to some influences, I’d say that Commander’s similar to bands like Obituary, Benediction, Bolt Thrower or Unleashed. Nice band to check out, they’ll remind you of old things. 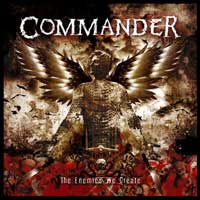