Forming in 2013 and featuring former members of Horrid, Daemoniac unleashes their debut EP. It’s a simple no nonsense half hour of rancid death metal.

After a nice 30 second intro the band blast into 'Away From Christ' it’s apparent from the get go that the band are heavily influenced by the Swedish death metal of the 90’s which is no mean feat. It is the sound they have aimed for and they have captured it brilliantly. Everything you want is here, 'Demonic Possession' for example, you have shredding and blast beats one minute and a grimy punky mid section the next. There are some great slow doomy moments also. The whole EP has that earthy, dirty sound that sounded so great on those early Entombed and Dismember albums. There is a pretty cool cover of Crematory’s thrown in for good measure. My favourite is actually the closing track “Lord Of Immolation” which starts off slow and murky and builds up to a great chugging climax with of course plenty of shredding!

All in all if you like a bit of Swedish flavoured old school death metal you will no doubt lap this up. However, as the band progress I’d like to see them develop more of their own sound. In the meantime though this will do fine! 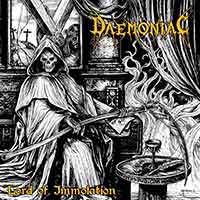