Daggerspawn – Suffering Upon The Throne Of Depravity

Suffering Upon The Throne Of Depravity is the official debut album for this band from Serbia formed in 2004 after few split releases and live albums (!!). The music is an old school death metal, influenced by bands like Cannibal Corpse, Broken Hope and Morbid Angel with a not too evident modern touch of brutal death core. The final result is quite good and pleasant even if it doesn't reach the high standards that we need to ask to an album of this kind: probably the production doesn't help the product but this is not the point. Generally speaking the songs have a good feeling and a satisfactory structure but there isn't the killer guitar riff to remember, the perfect passage: on the contrary… there are too many solutions that smell of big albums of the past. I mean… one thing is "the influences", another thing is when we try to hide "Gateways to Annihilation" (Morbid Angel) under another name. And it's not the only credit: a band that needs a different rank of personality. 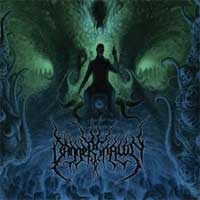