In 1997 when Philippe Gandibleu started his project. As he is handling all the instruments it is ovious that he needed a vocalist. After the debut album"Incantations" vocalist Patrick was replaced by AOD. With this new duo they released “The End of the Dark Ages” in 2002. After 5 years they release a new concept album based on fantasy. Musically the two are playing atmospheric black metal with medieval elements. Melody is the keyword with usage of folkish instruments. Vocals are narrating and singing with variation in dreamy songs that deal with battle, as the bandname is taken from "Lord Of The Rings".

"Herald Of Doom" is an album that can be listened to closely and try to imagine the battles vividly or you can use it as background music. The choice is up to you. 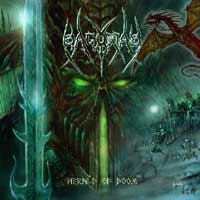