If you get to hear Dakon, you will never guess that this band comes from Moldova – a small Eastern European country with a pretty much obscure metal scene. Because if you don't pay attention to the slightly exotic origin, this band's music stands up to worldwide standards and will easily make your head go back and forth right from the first song. And does it really matter where the band is from if they play good music?

The music Dakon play can be best described by the term dark death metal. It has a lot of common with Morbid Angel, Suffocation, Immolation and the likes, however these guys don't fall to simply copying the style of death metal legends. Each of the five songs on this EP has a dark atmosphere to it, yet dynamically they are faster than typical dark death and can even make you remind of blackened death metal bands like Behemoth. The main focus in the music is placed on crushing and dark riffs that will make you squeeze those invisible oranges for the whole duration of the record. And I can tell you that hearing this music live will give you a great time in the mosh pit as well!

The production on this CD also deserves compliments because it sounds really professional. The main focus goes to guitar riffs, yet you can clearly hear all other instruments as well. The vocals are well-compressed and create the perfect mood together with the music. You would typically expect such production from a major European band rather than an underground act from a country you probably don't know about. And that's a really great achievement for Dakon.

The only complaint I have is that it's an EP and not a full-length album. Dakon already have a full-length record under their belt, which was released in 2006, and it would be really great if Drakones featured more than just five songs. However, each of these songs sounds really neat and I strongly suggest this band to anyone who loves intense, atmospheric and dark music and wants to hear something fresh and interesting. 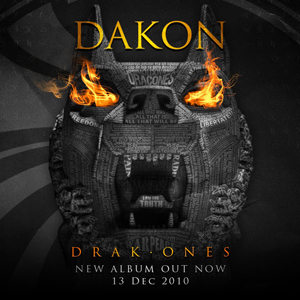