Distance Waits is (Damn) This Desert Air's second EP, but their first on a record label. The band hails from the U.S.A. and before their project were performing in many other notable acts such as Nora, Merciana, and Ex Number Five. Everyone brings their influences together and creates a mix of progressive rock that is heavily aggressive but also melodic at the same time. Each track gives something a bit different, which only adds to DTDA's credibility.

The album opens with "Ghost I Own" which is very slow and moody. The vocals are almost ethereal in their harmonic nature, somewhat like how Tool or Earshot sounds. At some point the music turns chaotic and a wall of distorted sound is thrown up, but it doesn't overtake the instruments fortunately. Instead, it is there to show both sides of the band... both the light and heavy side. Even within the heavy side there's lots of melody going on. "Trembles" features some great drum work and serves as the 'middle of the road' track for the band. It isn't too soft and isn't too aggressive; it sounds more like a mainstream rock track with progressive tinges. The guitars feature catchy rhythms and the vocals are a bit more clear. "Made Of Gold" is soft and easy going, almost a ballad. But, it is more haunthing than romantic the way the guitars take the extra pauses between notes. While it can get repetitive at times, the difference of pace and style makes this song very unique and enjoyable.

"Your Atlantis" draws on the same slow formula as "Made Of Gold," but adds more distortion and aggressive tendencies. The vocals shout a lot more and the guitars are much harsher with the chords they use. Every once in a while they soften up a bit though to let some melodies slip through. "Before Sunrise" starts out chaotic with plenty of hard rock riffs but then slows down in the middle to a calm buzzing before stirring up again. The grit and crunch to the music makes it feel like stoner doom metal, but the rawness is missing. Instead, DTDA makes up for it in melody. Finally, there's a remix of the first track, and it sounds nothing like the original. In place of the progressive rock style is a very ambiant, electronic track. It sounds very hypnotic and opens new possibilities for the band to incorporate the style more into their music.

With so much experience under their belt, it is expected that DTDA put out this kind of quality music. However, they do it well and with class. They can mix chaos with beauty and still come out OK versus other bands who try too hard and either sound like fifteen other progressive rock bands who all use the same formula. Instead, DTDA blaze their own path and create another stellar album. Hopefully Bastardized records will keep them long enough to unleash their first full length debut. 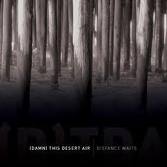