Dantalion - All Roads Lead To Death

Dantalion are not the typical 'atmospheric black metal' band one would expect. While some considering atmospheric acts to require lots of keyboards, ambient passages, and more of a haunted house sound along the lines of Karna, Darkspace, or Bornge, Dantalion create their atmosphere more in the guitars and pace of their music... which is very fast. In fact, one could almost call them straight on normal black metal because track after track on their albums they mostly just blast away with no remorse. These guys have been around for some time, and have kept a steady pace of albums since 2006 every two years. Their third album, 'All Roads Lead To Death,' is very similar to their first two; depressing titles/ lyrics and heay distortion played at hyper speeds.

The problem with the hyper speed and distortion is that after a while the music tends to sound the same and everything gets to be boring. While the opening track does offer a piano lead in, it the only shread of 'ambient beauty' the band has to offer. Ninety percent of the other time its full on raging black metal. The guitars are obviously the leading instrument throughout as they shread away with plenty of seamless riffs and solos, but combined with distortion somtimes it drowns out the drums, and certainly the bass. Only the vocals are the other instrument that can be heard to match up to par, and they are about the only thing that grants a haunting atmosphere, whether it is when they are a tortured screech away or have a hideous whisper. On a track like "Bleakness" the vocals and drums work very well together as everything finally seems like it slows down a little bit, but on a longer track like "My Last Breath" everything tends to wear out a bit quicker because the white noise bleeds too much into the sound as a whole.

Dantalion's lyrics certain create enough depression with tracks such as "Claws Of Pestilence" and "Scorn," but on the musical front sometimes they can tend to just tread water rather then really attract any attention. The music on this album isn't bad, but nor is it necessarily good. It's just mediocre as the band relies on the distortion from the guitars too much to create a backdrop for the rest of the music that is far too overpowering. The vocals are perfect for the situation, but everything else needs to slightly be turned up a bit so everything can be enjoyed. This is certainly a scathing black metal release for those who just want to drown in depression while at the same time feeling energetic, as all of Dantalion's works do. 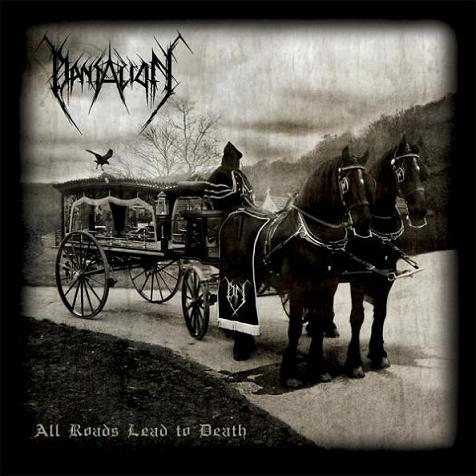