After a short intro (which could have more tension) you get three more songs from these Spanish black doom metallers. Started in 2000 and delivering their demo Bitter End. The songs have depth with the use of keys, synths and cello sounds. The vocals are two sided, the clean and more brutal/aggressive of which the clean doesn't sound that attractive. The second start as a rocket but falls into the mid tempo. Overall the songs are good to listen to and have a different tempos and idea to maintain you. So give them a try. 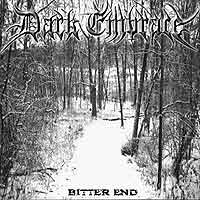 1. Dying breath (intro)
2. Bitter end
3. The threat of flesh and its libidinous storms of silence
4. Fragility of life

Self released
Reviewer: twansibon
Feb 26, 2009
Next review: Dark Disciple - Beneath The Inverted Cross