Official live album from these black satanic metal pioneers. Recorded during the South America tour 2003 and with a nice spoken intro. The setlist is a compilation of their entire back catalogue and besides the live album it is also a sort of best of. 14 Tracks of hellish blasphemy played fast and furious. Don't know how many dubs were done but the sound is good. For Dark Funeral fans a must and for those who are not familiar with them it is a good album for acquaintance. 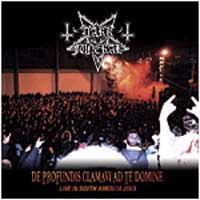 1. Intro
2. The arrival of satan’s empire
3. An apprentice of satan
4. The dawn no more rises
5. Thy legions come
6. Hail murder
7. Goddess of sodom
8. The secrets of the black arts
9. Vobiscum satanas
10. Shadows over transylvania
11. Open the gates
12. Ineffable kings of darkness
13. Thus I have spoken
14. My dark desires
15. Armageddon finally comes