The acronym NWOBHM stands for two distinct yet oddly similar ideas. It stands for New Wave of British Heavy Metal and it stands for New Wave of Black heavy Metal. Obviously there might be some cross-over here but the black metal scene is represented in this by Darkthrone of Norway. Darkthrone released an EP called New Wave of Black Heavy Metal and on this CD they were prepping their listeners for the cool new directions they would take on F.O.A.D. (stands for Fuck Off And Die). On this record they have certainly emblazoned the path for the New Wave because the album does not open with those inhuman screeching cries about ending life that Plaguewielder or the what-we-come-to-expect from the masters in terms of growl vocals. No, on this album Darkthrone has decided to envision a metal scene in which the waves of punk, hardcore, and metal blur. This has been done on very cool ways by bands as amazing as Prayer for Cleansing (as US vegan straight-edge band that sent members off to Between the Buried and Me). But in their context, the American bands were influenced by the Norwegian originators, not the other way around.

F.O.A.D. stumbles through the pagan woods in feeling but on the way it grabs makeup and gets arty. In the pure rock song, “The Church of Real Metal,” Darkthrone showcases Fenriz’s beats with Nocturno Culto’s bass smoothness over a full throat slow growl of the chorus. I love it because the music has slowed down quite a bit and the vocals are clearly stated but that slow growl is weighty in its own way. In fact, it gets cooler the more times I listen. Not just because it is varied from the majority of Darkthrone’s other work, but also because I like to feel the pain in the vocals, that pain of ripping through our space and time without often flying by that pain as quickly as is normal. The title track then really ups this effect by creating an actual rock song, a song that reminds me so much of something way back. I can’t even put my finger on it. It’s that crazy to hear Darkthrone yell vocals that are clear yet angry and repetitious yet necessary. It’s like Jim Morrison is wearing all black and just came out from sacrificing something bloody at the altar in the woods and formed a band. I think this might be something of the voice I hear in that track.

Other tracks do not have the same response for me, but that’s okay. Darkthrone is particularly angry here, not just with religion or European politics, but with the scene itself and their own pigeonhole. I just think they are using this album to break out of their personal ruts by making the CD very personal. I get the impression that Fenriz and Nocturno Culto want to show that they are not just players and creators of the metal scene but also have long hours logged in front of the stereo listening to music from all over. I know this because one of the last tracks on the CD is called “Raised on Rock.” This CD is made for listening in the car. It is a play-loud album and should be purchased to do just that. 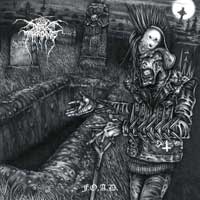 1. These Shores Are Damned
2. Canadian Metal
3. The Church Of Real Metal
4. The Banners Of Ol
5. Fuck Off And Die
6. Splitkein Fever
7. Raised On Rock
8. Pervertor Of The 7 Gates
9. Wisdom Of The Dead