After some silence these Polish grinders are back together and before releasing a brand new album, Oscene is releasing this greatest hits album. 30 Smashers with sick vocals, fast drumming and massive guitarriffing. Dead Infection should be known in the scene and so people are waiting to get their hands on this album. All songs are remastered with acceptable quality. Hilarious is the Bee Gees cover, imagine John Travolta doing his dance on this one! Curious although how their new album will sound like. 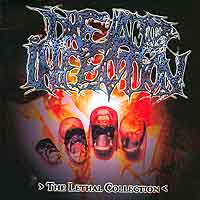 1. Poppy-seed cake
2. Mysterious wine
3. Flying shit in the outer space
4. Gas from ass
5. After accident (part 2)
6. No pate, no mind
7. He makes hit who makes shit last
8. Death by the master-key
9. We are all polish
10. Where is general?
11. Uncontrolled flatulence
12. From the anatomical deeps
13. Life of a surgion
14. Her heart in your hands
15. Her firing ground
16. Total dismemberment of a female corpse
17. Raping the earth
18. D.i.
19. Clean the scene
20. Slithering maceration of ulcerous facial tissue
21. Stayin’ alive
22. Consequence
23. Owce
24. Prison without walls
25. Pugent excruciation
26. Consequence live
27. Uncontrolled flatulence live
28. Merry-go-round live
29. Fire in the forest live
30. Tragedy at the railway station live