Dead Twilight - A Litany For The Deads

Machine gun drums, industrial strength guitar riffs and peel-out squeals, in your face growls that ain't gonna takes no more. These are all qualities that make death metal fun, and these are all part of the dynamics that are present in "A Litany For The Deads" by Dead Twilight. Dead Twilight list bands such as Nile and Incantation as influences. They claim their lyrics are influenced by the movies of George A. Romero (Dawn of the Dead) and the Tibetan book of the dead, and upon listening to "Litany of the Deads" one gets the feeling that he is indeed summoning a zombie apocalypse. Crank this shit up loud enough to wake the dead or your neighbors -- same difference really. 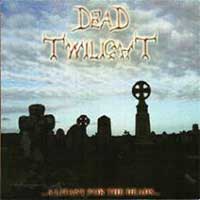