Deathonate from Drachten, Netherlands was formed back in 2005 and they call themselves a melodic Death Metal act. Well, the vocals truly refer to the Gothenburg school of Death Metal, but the music's kinda Heavy / Power Metal influenced stuff with keyboards, which are fortunately not too dominant. The production is ok for a very first self-financed relase, but the drums are drowning a little bit and the vocals are pretty one-dimensional. Listening to “Walk The Line” immediately reminds me of Children Of Bodom, Soilwork and all the other copies we already know. Don't get me wrong: the guys surely have the potential to write good riffs, but with this debut EP it isn't fully displayed yet. With more time in their rehearsal room, Deathonate could easily deliver more originality or innovation. Until then they will be swallowed by the huge underground scene where they stand in line with all the In Flames or Children Of Bodom clones. Hopefully they won't waste their obvious talent and time any more and offer us own ideas as well as furious and more reasoned songs in the future. 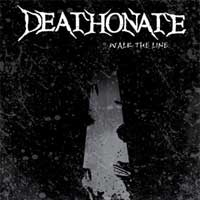