There are some albums that just are relentless and like a train wreck right in from of you, one can’t ignore it. Deathspawn’s debut "Reverendus" is one of those albums. While it goes by quite quickly, the sheer fury of this Polish group cannot be denied. With a mix of Hate Eternal “I, Monarch” era and more recent Abysmal Dawn, this is some very solid, no frills, right to your face death metal. There isn’t too much variation between tracks but right from the start ‘Grace Of Purpose’ hits like a truck with no mercy for the ears. The vocal tones, guitars, and drums are all balanced, but it is the drums that will instantly grab one’s attention. They are loud, mechanical, and dangerously close to the dance beats of “Illud Divinum Insanus” by Morbid Angel. While a lot of people have hatred for that album, “Reverendus” corrects what Morbid Angel tried to do and just uses the hyperblast sound to enhance their pace. Even if the drums do sound ‘dancy.’ The group tries to do other things like include more melodic solos such as on ‘Sacred Ground’ and ‘The Relusion’ which add darker elements to the music, but the vocals and pace tend to stay the same no matter what.

The second half of the album shifts a little more away from Morbid Angel towards the Abysmal Dawn sound, which a little more technicality on the drums so they’re less mechanical and monotonous. The fury of the title track is about as fast and solid as death metal can go, but it also is one of the weaker tracks because it just doesn’t feel as lively as the others. Thankfully, ‘Rage Of Pariah’ rectifies that by giving the fury a purpose with its sound and it feels like one is back to the tightly crafted sound of Hate Eternal. One thing that listeners can pride knowing for Deathspawn or admire is these guys never seem to lose their steam. For better or worse everything always sounds perfectly balanced that it is very hard to complain if the drums sound buried, the vocals crack, or the riffs go by so fast the solos seem too brief. The churning, bitter riffs sound evil as hell but aren’t cavernously drenched in reverb.

‘Traitors Will Pray’ changes things up a bit. Here Deathspawn feel more restrained as they go more for a stop n’ go pace with their hard chugs, but to make up for that they have some of the most awesome drum moments. This should have been the track to go out on as ‘Mausoleum Of Bones…’ tends to fall back into obscurity a bit as it sounds a bit too much like the earlier tracks, but there is still a heap of groove that was missing from the first half of the album, and the solo is just downright beautiful. Who can’t deny chanting the chorus at the shows with his one? Ultimately, the album does to by too quickly, but at least listeners will be left wanting more. “Reverendus” is uncompromising in its vision of death metal giving fans exactly what they want. It may not please everyone but the production alone should be enough to enjoy everything. Slightly over polished, yes, but it really helps bring out the drums which are usually buried that they sound like wheels on a train track. Deathspawn will be a death metal force to reckon with in the future to come. 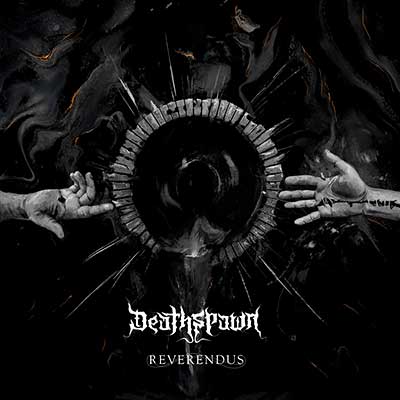 1. Grace Of Purpose
2. Sacred Ground
3. Masticate The Soul
4. The Relusion
5. Reverendus
6. Rage Of Pariah
7. Traitors Will Pray
8. Mausoleum Of Bones And Flesh